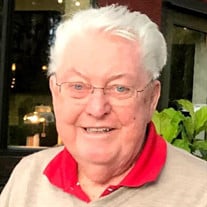 Terence “Terry” Augustine McGoldrick, Jr., was born in Chicago, Illinois on July 17, 1936, to Irish immigrant Terence Augustine “Gus” McGoldrick and Mary O’Toole of Pittsburg, PA. Gus immigrated from Ireland as a young man and settled in the Chicago area with Mary, who he met at an Irish American Club social event. During many years of Terry’s youth, he and his parents and his three siblings lived behind and above his parents’ tavern, McGoldrick’s Tavern, in Bellwood, IL. Over the years, Terry would share memories of living above the tavern while growing up, which included; the sound of the jukebox changing records when the customers where selecting their tunes while he and his brother were trying to fall asleep, and his father reciting Shakespeare to the patrons. The family shared many duties beginning at a young age to help run the tavern. His mother would prepare delicious meals from the family’s kitchen for the paying customers, and sometimes the non-paying customers who needed a meal now and again. Terry attended St. James Catholic School in Maywood, IL, for his elementary education, then Fenwick High School in Oak Park, IL, and the University of Illinois for courses in electrical engineering. Terry met the love of his life, Diane Abbott, at a dance sponsored by a local Catholic club. After a couple years of dating, they were married October 13, 1956. They enjoyed their honeymoon in Key West, Florida. Between the years 1957 and 1960, Terry and Diane added three sons to their new family. After their marriage, Terry worked at the post office and studied electrical engineering in night school before starting a very successful sales and marketing career with the 3M Company in 1965. In the early 1970s, as a business venture, Terry and Diane purchased a few cabins in Delavan Lake, WI. Along with their three sons, they put a lot of work into maintaining the cabins before renting them to summer vacationers. Today his sons remember how their Dad jumped for joy the day he sold the cabins. In 1974, Terry accepted a management position at 3M Corporate Headquarters and moved his family to Minnesota to begin a wonderful life in White Bear Lake, in the home they built on Bald Eagle Lake. In 1982, Terry accepted an international marketing position with 3M Europe. He and Diane, along with their cat Peppy, moved to Brussels, Belgium for four years. They enjoyed traveling throughout Europe with their family and friends who came to visit them during their years overseas. After their return from Belgium, Terry transferred with the 3M Company to Austin, TX . After Terry’s retirement from 3M in 1996, he and Diane made their home in Marco Island, Florida for many years. Terry was an avid golfer. He also enjoyed, boating, and traveling with Diane, which included several cruises, one of which was a family cruise celebrating their 50th wedding anniversary in 2006. Always the raconteur, in retirement he became an Emailer Extraordinaire when he shared many jokes and stories via email for his many recipients to enjoy. Terry is preceded in death by his parents and sister, Marie Varsegi. He is survived by his wife, Diane, and three sons; Terence (Theresa) of North Attleboro, MA; Brian, of Stillwater, MN; and Kevin (Terri), of Apollo Beach, FL; his brother, Joseph (Barb) of Oakbrook, IL; sister, Sheila Jackson, of Bellwood, IL; sister-in-law, Sharon (Stephen) Sener of Pasadena, CA; brother-in-law, Jef Abbott (Susan); sister-in-law, Kerry Abbott; and many nieces and nephews. He is also survived by eight grandchildren; Amanda, Michael (Julia), Aiden, Grace, Brendan, Meghan, Andrew (Hillary) and Christopher (Jamie); and seven Great-grandsons, Robert, Brady, Josh, Henry, Ben, Luke and Micah. A memorial service for Terry will be held at a future date. Please check back for updated details. The family has requested no flowers or gifts be sent. Please disregard the link below.

The family of Terence Augustine McGoldrick Jr created this Life Tributes page to make it easy to share your memories.

Send flowers to the McGoldrick family.