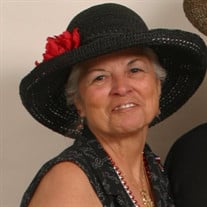 Shirley Ann Noguez Ramos, 80, entered eternity on July 19, 2020, her wings earned, now watching from above. Shirley was born on August 17, 1939 in Tampa, Florida, to first generation Tampanians Ignacio Noguez and his wife Zoraida Ramirez Noguez. Shirley was the second of four daughters, preceded in death by her elder sister Alice, survived by her younger sisters Zoraida (Cookie) and Joyce, as well her two half-sisters Connie and Carol. Shirley graduated from Plant High School in 1957 with commendations for her work in the athletic department, eventually finding employment with Electric Supply Co., Inc. In 1958 a young man she had previously known, home on leave from the Navy, saw her while she was shopping with her mother and knew he would marry her. Vincent Calistus Ramos Jr., the son of Vincent Calistus Ramos Sr. and Edelmira (Nini) Sanchez Ramos, would marry Shirley Ann Noguez at Christ The King Catholic Church, on South Dale Mabry, on June 12, 1959. This would begin a love affair spanning more than six decades. Vince and Shirley wasted no time starting a family, giving birth to their first child, Monica, in March of 1960. Eight days later, tragedy would strike as Shirley would lose her mom to an unexpected passing. As a new mom, with a new baby, Shirley would find her resolve in the midst of her anguish. She would find her motherly support from Vince’s mom, Nini. Shirley’s maternal instincts needed no grooming though, she was born to love and teach children. She would blossom into a force to be reckoned with that could throw shoes around corners, yet show the tenderest of love and care. Shirley’s entire life was about children. She worked as a teacher’s assistant at Alexander Elementary while her kids were in school, she also coached softball and baseball, led Girls Scouts, was a den mother for Boy Scouts, and volunteered at her children’s schools as often as she could. This passion for teaching and nurturing children didn’t end with her own, every moment spent with a child was an opportunity to teach. Until she was in her late 70’s, Miss Shirley’s unconditional love and ability to create joy in little one’s hearts would touch countless numbers of children that loved her as much in return. So much so that children she nurtured would have their own children come to be nurtured by Miss Shirley. In addition to her love for children, Shirley loved the relationship between insect and plant life. It was normal for her to have either a caterpillar, cocoon, or butterfly in the entryway to her home. A published writer and poet, Shirley loved writing and sharing her stories with her loved ones. She was always quick to pass along a good book or a writing to someone she thought would like it without anything expected in return. Her house was open to all. There you could always find her refreshing insight and advice on any subject you needed, or a simple conversation filled with humor that would leave you chuckling for the rest of the day. Above all her home was a place where love reigned ever present. She is survived by the love of her life Vincent C. Ramos Jr., married 61 yrs., and by her 8 children: Monica Veronica Erica Jessica Vincent Scott Myrica Randy, (spoken like one word with no breath). She was Grandma to 34 grandchildren and 28 great grandchildren. The family will be gathering for a private Celebration of Life.

The family of Shirley Ann Ramos created this Life Tributes page to make it easy to share your memories.

Send flowers to the Ramos family.