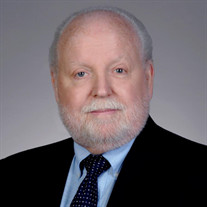 Dupree, Dr. Larry W. of Tampa, FL died July 21, 2021 at the age of (82) years. His predeceased parents were Ollie L. Dupree and Lola V. (Surrency) Dupree. Also predeceased were his brothers Ollie Lee, Jr. and Ray Beyer Dupree (Betty). He is survived by his sons James Michael Dupree (Pamela) and Drew Dupree, his sister Brenda Harlan (Roy) (all of Tampa), grandchildren Samantha Dupree and Johnathon Dupree, and nieces and nephews. He was a native of Tampa and graduated from Thomas Jefferson High School. He received a Ph.D. in clinical psychology from Memphis State University, as well as bachelor and master’s degrees from USF. He was in the 1960 inaugural class of USF, as well as the first gerontology master’s degree program in the nation. He was a pioneer in the fields of mental health and substance abuse treatment of older adults. He developed, implemented and evaluated innovative treatment programs for older alcohol abusers, and consulted to the Substance Abuse and Mental Health Services Administration in the development of national treatment guidelines for older substance abusers. SAMHSA published and distributed nationally his and his colleague’s model for evaluating and treating elder substance abusers. A member of the American Psychological Association, and a fellow of the Gerontological Society of America, he served on numerous state and national expert panels regarding elder mental health and substance abuse issues. He produced refereed publications, book chapters, and books; and authored or co-authored best practice curricula on elder mental health. His presentations to professional organizations were many and well received. In 1998, he cofounded the Florida Coalition for Optimal Mental Health and Aging an impetus for statewide collaboration among mental health and substance abuse professionals. He served as a faculty member at the University of South Florida in multiple departments while also serving as chair of the Department of Aging and Mental Health at USF’s Florida Mental Health Institute. Upon his retirement in 2008 after 32 years at USF, he was granted emeritus status. He was founder or co-founder of several clinical programs at USF’s FMHI: the Gerontology Alcohol Project, the Community Aging Program, the Substance Abuse Program for the Elderly, and the Mature Adult Counseling Center. In addition, he helped to develop and co-direct other projects at the university such as the Geriatric Education Center, and the graduate mental health counseling track in the USF Dept. of Gerontology. In addition, he was a member of the initial committee that established a Ph.D. program in aging at the university, was a member of the executive committee of USF’s Institute on Aging, and was a member of the board that established the Life Enrichment Center of Tampa. He also presented and consulted to state, federal and international organizations on substance abuse among older adults, as well as later-life onset psychopathology. In addition, he served as a clinical consultant to USF’s Memory Disorders Clinic, as well as co-PI in studies evaluating behavioral effects of experimental drugs related to cognitive impairment in older adults. The American Society on Aging’s Mental Health and Aging Network awarded him its Mental Health and Aging Award for 2007. The award honored his many contributions to improving the availability, accessibility, and quality of programs for community residing older adults and their families. He was licensed to practice psychology in Florida. Larry loved to laugh and make others laugh, help others, and be with his family and close friends. He often said that he lived a blessed life made possible by his family and USF colleagues. Funeral services will be Thursday July 29, 2021 at Temple Terrace United Methodist Church – 5030 E. Busch Blvd. Temple Terrace, FL. 33617. Visitation will be from 9:00am to 10:00 am Celebration of Life will be from 10:00 am to 11:00 am. A private family only grave site service will be held at Woodlawn Cemetery. In lieu of flowers donations may be made in his memory to Metropolitan Ministries https://www.metromin.org/

The family of Dr. Larry W. Dupree created this Life Tributes page to make it easy to share your memories.

Send flowers to the Dupree family.