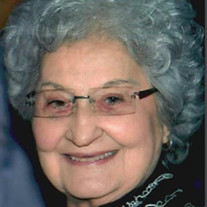 Dora Scolaro Caltagirone, a caring, confident and honorable woman died on February 19, 2022, after a long and well-lived life. Dora was born in Tampa on October 17, 1926 to Sicilian immigrants, Domenico and Anna Scolaro, who preceded her in death. She was also preceded in death by three sisters, Mary Valenti, Angie Sanchez and Frances Ginex and one brother, Dr. Joseph Scolaro. Dora’s parents came to Tampa from Sicily in the hope of creating a better life for their children. Their dreams were fulfilled in each of the lives of their children. In 1948, Dora married Joseph P. Caltagirone, the man who captured her heart for 71 years and preceded her in death. Together they built a full life. As world travelers, they visited three continents and numerous countries and enjoyed the richness of cultural experiences around the globe. They shared a great pride in their Sicilian heritage and visited Sicily and Italy 10 times! Their lives were rich with close knit family, a circle of friends and many civic activities. On the very day of her 50th anniversary of marriage to Joe, they celebrated by renewing their marriage vows at the Convent of San Nicola in the Valley of the Temples, Agrigento, Sicily. Joe and Dora shared their lives in many homes; all of them reflected some of Joe’s expert architectural applications and his love for his wife. The final home where they lived together just two years ago, was the house on Apian Way. Because Joe and Dora were among the founders of the new subdivision whose main road was Apian Way, they were able to name that street. The name reflects their love for all things Italian/Sicilian. Appian Way (Via Appia),the first and most famous of the ancient Roman roads, was begun over 300 years before Christ and still exists today. For us today, the Apian Way reflects longevity and durability. The house on Apian Way, which Joe named Villa Dora with permanent signage, a home that reflected a lifetime of love together for Joe and Dora, a beautiful blending of two spirits, a love for and celebration of family and especially seven decades standing together in good and bad times with a river of love always flowing through them. That house on Apian Way with its Mediterranean Revival architecture, reflects their common love of their heritage. Bell towers give a building a sense of elegance and a sense of transcendence. Their home had a bell tower. It reflected the life of a couple who stood together with dignity, gentility and respectability for 71 years. It spoke of a couple who have lived a full and caring life and in eternity will walk with respectability and honor into the arms of a transcendent God. Dora’s love of her heritage inspired her involvement in numerous Sicilian/Italian organizations. Dora served in leadership positions in these organizations including as Trustee and Financial Secretary for La Nova Sicilia and Loggia Mona Lisa, both associated with the Sons of Italy. At the state level, she served as corresponding secretary for the Grand Lodge of Florida for the Sons of Italy for more than one term. Dora was awarded the Italian Woman of the Year Award by the Daughters of Italy Lodge. Throughout her years of volunteering for these organizations, she under took many responsibilities that promoted the goals and objectives of these cultural organizations. Dora was a woman ahead of her time. She completed 42 years of service at MetLife during which she worked her way up the ranks, quickly earning a management/supervisor position, something not often heard of when you are speaking of women employees in the 1940s through the 1980s. Dora supervised large numbers of clerical workers and teams of sales representatives and their respective sales managers. Her responsibility were numerous and serious. When MetLife established headquarters in Tampa in 1976, Dora was promoted to a supervisory position that involved overseeing a newly created department for Finance and Electronic Services. She had already broken the glass ceiling; to be subsequently awarded this responsible and prestigious position was a testament to her outstanding competence. Dora was also an accomplished classical pianist. Dora is survived by a brother-in-law, Philip Caltagirone of Tampa and by numerous nieces, nephews and cousins. She is also survived by 18 Godchildren! Dora was a woman of great dignity and intelligence; an outstanding wife and a friend to many. May she rest in peace and may our memories of her be a source of blessing to those who knew her. Pallbearer will be: Joe Valenti, Ray Sanchez, Mark Ginex, Michael Caltagirone, Louis Caltagirone, Anthony Manali, Joe Caravella, Michael Perricone, Thomas LoCicero and Mario Plazza. The family wishes to offer its sincere and heartfelt appreciation and thanks to Casa Loreto ALF for their wonderful and loving care of “Dorita.“ Also, the family would like to offer its thanks to the special assistance provided by Hospice Care. Those who wish to honor Dora‘s memory, could make donations to the Italian Club Cemetery or Hospice.

Dora Scolaro Caltagirone, a caring, confident and honorable woman died on February 19, 2022, after a long and well-lived life. Dora was born in Tampa on October 17, 1926 to Sicilian immigrants, Domenico and Anna Scolaro, who preceded her in... View Obituary & Service Information

The family of Dora Scolaro Caltagirone created this Life Tributes page to make it easy to share your memories.

Send flowers to the Caltagirone family.