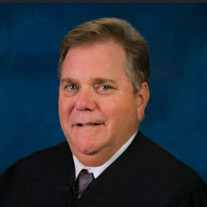 The Honorable Judge Carl Coy Hinson, age 61, born on December 17, 1959 Tampa, FL; sadly, passed away in Tampa on December 3, 2021. Judge Hinson was an elected Circuit Court Judge of Hillsborough County, where he served with honor and distinction. He earned his B.A. in Management from the University of South Florida in 1982 and his J.D. from Nova University Law School in 1986. Judge Hinson enjoyed practicing law and was a Certified Circuit Court Mediator before he was elected Judge to the Circuit Court. He was a Tampa native and a 1977 graduate of Hillsborough High School. He continued to be involved in a wide variety of service community activities. Judge Hinson was a member and Knight in the Krewe of Sant' Yago, The Justice of the Phi Alpha Delta Fleming Chapter, Nova Law School and many other associations. Judge Hinson enjoyed helping others and was a happy person who always had a good story to share. He brought great joy to anyone who knew him. Judge Hinson was a man of faith and had endless love for his family. While a safety patrol guard, at Egypt Lake Elementary School, Tampa, age 12, Judge Hinson was presented the School Safety Patrol lifesaving award medal in Washington D.C. by Florida Congressman Sam Gibbons for his Heroic actions in saving a student's life when he pushed an errant student from the path of an oncoming vehicle, and saved a child's life. He was also given a commendation by the Hillsborough County Sheriff's Department for his bravery. He left value and lasting impressions in so many lives. He will truly be missed, and will always be remembered. Judge Hinson was a devoted husband, father, and son. He is survived by his beloved wife, Yvette of 32 years; daughter, Vanessa; father Coy Hinson Tampa, FL., and other family members. Preceded in death Judge Hinson's mother, Charlotte T. Hinson; and his sister, Diana Lyn Leon. Visitation will be held on Friday, December 17, 2021 from 5pm-9pm at Boza & Roel Funeral Home 4730 N. Armenia Ave. Tampa, FL. 33603. Funeral held on Saturday December 18, 2021 at 10:00am at St. Lawrence Catholic Church 5225 N. Himes Ave. Tampa, FL. 33614. Burial to follow at Lake Carroll Cemetery 2401 Myers Ln. Tampa, FL. 33612. Judge Hinson's family would like to Thank all their family, their Court family , and friends for all their support, love and compassion. He was a member of many associations. Judge Hinson was a member of The Florida Bar, Hillsborough County Bar Association, Florida Justice Association, Past President of Tampa Bay Trial Lawyers Association, Board of Directors and member of The Tampa Bay Trial Lawyers Association, Member of the Board of Directors of the Carrollwood Bar Association, He was active in in the Greater Brandon Chamber of Commerce, Plant City and Greater Riverview Chambers of Commerce, the Economic Club of Tampa, and also a Knight and served on the board of directors of the Krewe of Sant' Yago. Served. He was a past Volunteer speaker for Hillsborough, Leto, Tampa Catholic High School and University of Tampa. He was a generous , brave and loving man who always made a difference. His personal philosophy is integrity, which is an original blend of good humor and a serious purpose in life. He established this through his dedication, his honest dealings with others and his hard work ethic which made him successful in all his commitments. We are so proud of you Carl. We love you and you will always be with us. Rest in Peace. In lieu of flowers, donations can be made to a memorial for Judge Hinson in The Villa Madonna Pavilion Project to benefit the children from the Salesian Youth Center along with Villa Madonna School. Mail to Villa Madonna School, Attention: Theresa Anderson at 315 W Columbus Dr., Tampa, FL 33602. Website: https://www.villapavilion.com/

The family of The Honorable Judge Carl Hinson created this Life Tributes page to make it easy to share your memories.

Send flowers to the Hinson family.