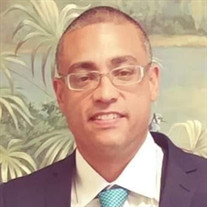 Steven Bobby Cintron, beloved son, brother, uncle, cousin and longtime resident of Tampa, FL died unexpectedly on January 5, 2021 at the age of 40. Steven is survived by his parents, Lillian Vazquez, Sixto Cintron Jr. and Cynthia Garcia Cintron; his grandfather, Juan Bonilla; and his siblings, Sixto Cintron III, Seth Cintron, Elgin Cintron, Merissa Colon and Danny Rodriguez. He is predeceased by his grandparents, Sixto Cintron, Juana Martinez Cintron and Quintina Bonilla. Born in Brooklyn, NY on August 11, 1980 to Lillian Vazquez and Sixto Cintron Jr., he moved to Miami, FL with his family in 1992 then to Tampa, FL in 1996, where he resided until his death. A hard worker that learned the family business, Steven became a skilled Dental Technician and eventually started several businesses of his own. Though he never married nor had any children, he was a devoted son, brother, and uncle who loved his family dearly. A free spirit and gentle soul, Steven always saw the best in people and was known for his lighthearted demeanor and sense of humor. He had a soft spot for animals of all kind and cared for several domestic and exotic pets throughout his life. Never afraid to strike up a conversation, Steven developed many friendships with people from all walks of life who confided in him. He was loyal, easy to talk to, and would go out of his way for his loved ones. He will be deeply missed by his friends, family, and all who knew him.

The family of Steven Bobby Cintron created this Life Tributes page to make it easy to share your memories.

Send flowers to the Cintron family.