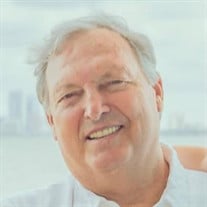 Ronald William Brown, age 74, passed away on September 8th, 2021, at Tampa General Hospital. Ron was born on April 30, 1947, to Garnett and Susan Brown in Sayre, PA. He graduated from the University of Tampa in 1969. Ron was a standout player on the Spartans football team, he was known as The Crusher'' by teammates. He was honored as an All-American in 1968 and played in the American Bowl in 1969. Ron was inducted into the University of Tampa Hall of Fame in 1972 and received the Key to Tampa. After college, he served in the Army National Guard until 1975. Ron taught history and coached football at Tampa Catholic then moved on to enjoy a career at Xerox where retired after 30 years. Ron met his wife Carol Midulla while in college, and they married in 1969. They have two children Ronnie and Jessica. Ron cherished the time the family spent driving back to Sayre each winter. There are many memories of sledding, building igloos, ice skating on the local pond and spending quality time with relatives and friends. Rons five grandchildren meant the world to him, he loved them with all his heart. He would sing nursery rhymes on demand, always attend their sporting and dance events, loved going to amusement parks and was notorious for late night ice cream runs. P-Paw truly enjoyed watching the children grow and looked forward to celebrating Christmas with all the lights and decorations he could get his hands. Ron will always be remembered for his generosity, huge heart, and his keen sense of how much an item cost. He called it the way he saw it at and at a volume everyone would hear. His background in history kept politics at the forefront and generated endless discussions full of interesting facts and heated debates. And it never mattered how the discussions ended, he always welcomed you to an Italian Sunday family dinner at his home. He is survived by his wife, Carol (Midulla), his children Ronnie and Jessica; son-in-law Bill Lanzetta; grandchildren Dylan, Blake, Riley, Vincent and Lily. Mother-in law Lily Midulla, Brother-in law Frank Midulla and many friends whom he considered his family. He is predeceased by his father Garnett, his mother Susan and his sister Teresa. A funeral Mass will be held at Saint Lawrence Church in Tampa on October 8th at 10am. His final resting place will be at Saint James Cemetery in Sayre, PA. If you would like to make a memorial gift, please send a donation to the Cystic Fibrosis Foundation c/o Vincents Heros. Ron will be missed by so many, but the special memories will be with us forever.

Ronald William Brown, age 74, passed away on September 8th, 2021, at Tampa General Hospital. Ron was born on April 30, 1947, to Garnett and Susan Brown in Sayre, PA. He graduated from the University of Tampa in 1969. Ron was a standout player... View Obituary & Service Information

The family of Ronald W. Brown created this Life Tributes page to make it easy to share your memories.

Send flowers to the Brown family.