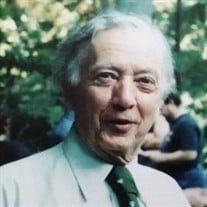 Robert C Schneider of Tampa Palms, FL, Wilmington, NY, and Noank, CT died peacefully of COVID-19 on July 23, 2020. Robert came to Tampa to be near his daughter while he resided in memory care after years of decline due to Parkinson’s Disease. Witty and content to the end of his life, he always enjoyed a good pun or wordplay with his caregivers and family. Born July 12, 1931 in the Bronx, NY to Louise D (Taylor) and Charles B Schneider, as a young child Robert regularly spent weeks at a time in the Shriner’s hospital receiving care for a club foot. This was clearly foundational to his outgoing nature and the kindness he showed to all people. For 20 years Robert was a social worker for the State of Connecticut at Seaside Regional Center in Waterford, Connecticut. He was instrumental in building the program that enabled his intellectually disabled clients to leave their institutions and instead live with caring families in what were called Community Training Homes. For the next two decades, Robert was a staff oral interpreter at the Mystic Seaport Museum in Mystic, Connecticut. He researched primary sources held in the Collections Research Center and studied the era’s history to create and then embody characters living in the 19th century whaling village. He performed and interpreted maritime culture in this way for many thousands of visitors from all over the world. Throughout his life Robert was a professional and community-based actor - spanning more than 60 years. In 1960, he met his wife-to-be, Renate, in summer stock theater outside New York City. After they moved to Noank, he was both actor and director with their community theater groups the Leonine Players and the Seabury Players. He was also a professional storyteller as part of the Tale Spinners with his wife. As an elder, he joined the Flock Theater in New London, Connecticut, and retired from there in 2008 when the Parkinson’s became too challenging. A member of St Mark’s Episcopal Church in Mystic, Robert was a lay Eucharist minister and enjoyed being a lay reader and chalice bearer for more than 40 years and brought communion and fellowship to homebound members. Also a member of St James Episcopal Church in Au Sable Forks, NY and St Eustace Episcopal Church in Lake Placid, NY, losing the ability to attend church was very hard for him. He is survived by his wife of 59 years Renate B (Augspach); his only daughter Nam Joti K Khalsa and her wife Gururas; a niece and five nephews, grand- and great-grand nieces and nephews; and countless friends, caregivers, and audience members. In lieu of flowers, please make memorial contributions to the Flock Theater or any theater company you would like to support at this time.

Robert C Schneider of Tampa Palms, FL, Wilmington, NY, and Noank, CT died peacefully of COVID-19 on July 23, 2020. Robert came to Tampa to be near his daughter while he resided in memory care after years of decline due to Parkinson&#8217;s... View Obituary & Service Information

The family of Robert C Schneider created this Life Tributes page to make it easy to share your memories.

Send flowers to the Schneider family.