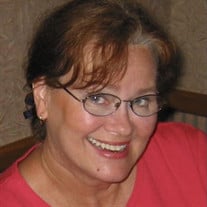 Peggy Allen Luttrell, 74, of South Daytona, Florida, passed away peacefully June 25th, 2021 in Tampa, Florida. Her last words were, “I love you baby” to her only child, Shaun. Her funeral service will be held Tuesday, June 6th 2021 at Boza & Roel Funeral Home, Tampa, followed by internment at Myrtle Hill Cemetery, Tampa. Peggy was born on May 21st, 1947 in Beckley, WV to Esther and Teliford Allen. She was the 8th of 9 children. Peggy was a diligent student and high school academic athlete earning top honors. Like her mom, Peggy loved dancing. She was known to grab family members and drag them out onto the dance floor. She was affectionately nicknamed “Joy Bug” by her siblings. Peggy attended Pace University and Brooklyn College in New York City. After college, Peggy worked at the Chamber of Commerce in her hometown of Beckley before being recruited to participate in a local beauty pageant. She was crowned Miss Raleigh County, WV and went on to become the first runner-up for the state of West Virginia in 1969. Shortly after, Peggy married Michael David Luttrell and they moved to Daytona Beach, Florida where they had one son, Shaun Michael Luttrell. Peggy was a devoted mother, who dedicated her life to her family. She served as a Little League “team mom” for many years and participated in fund raising efforts for the South Daytona Little League organization. Peggy was a paralegal for the law firm of Sands, White, & Sands PA in Daytona Beach where she developed many close friendships over a span of four decades. Peggy is survived by her son, Shaun, his wife Fe, grandchildren Sienna & Pierce, sisters Carol Moses & Sheila Scott, & brother Charles Allen. She is predeceased by her parents Esther Sutton Allen & Teliford Allen, brothers Estel Allen, Harold Allen, Bill Allen and sisters Shirley Miller & Norma Jean Rutledge. Peggy will be greatly missed by all those that knew her.

The family of Peggy Allen Luttrell created this Life Tributes page to make it easy to share your memories.

Send flowers to the Luttrell family.