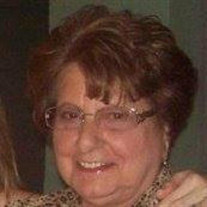 Muriel Jean Silva of Tampa passed away on Wednesday, October 14. 2020 at St. Joseph’s Hospital. She was born in Gloucester, Massachusetts on 12/3/1932. She attended Gloucester High School and Boston Business College for Women. She is survived by her beloved husband of 67 years Richard A. Silva Sr. She is also survived by three children, Laverne J. Lawrence (Terry), Richard A. Silva Jr., Yvette J. Smolarick (Eddy Cunill), four grandchildren, Heather Lawrence King (Scott), Courtney Lawrence Wamsley (Michael), Corey Smolarick, Megan Smolarick and five great grandchildren, Baylie King, Mackenzie King, Avery King, Madeline Wamsley and Michael Wamsley Jr. and many nieces and nephews. She was predeceased by her father, Joseph C. Silva Sr., mother, Leonora Silva, one sister, Eleanor Silva Canas, and a brother Joseph Silva Jr. Richard and Muriel moved to Florida from Massachusetts in 1959, where they settled in the home where they currently reside (Plaza Terrace). Throughout the years they were heavily involved in the development of St. Lawrence Catholic Church and School where they have been members since 1959 and where all three of their children went to school. Muriel worked in the banking industry for several years in administration, where she took early retirement allowing her to spend time with her grand and great grandchildren attending school and sporting events. Muriel found the most joy in life being with her beloved husband, Richard, and playing the organ surrounded by a house filled with family. She loved the holidays and spent countless hours on her extensive holiday decorations. She will be deeply missed by her family and countless dear friends. "The family would like to thank her loving caregiver Graciela De Marco for her dedication and love for Mom throughout the past several years"

Muriel Jean Silva of Tampa passed away on Wednesday, October 14. 2020 at St. Joseph&#8217;s Hospital. She was born in Gloucester, Massachusetts on 12/3/1932. She attended Gloucester High School and Boston Business College for Women. She is... View Obituary & Service Information

The family of Muriel J Silva created this Life Tributes page to make it easy to share your memories.

Muriel Jean Silva of Tampa passed away on Wednesday, October...

Send flowers to the Silva family.