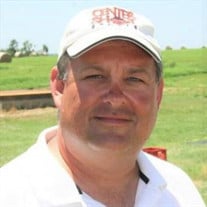 Marvin Charles Spinks, with his wife Bonnie by his side, passed peacefully home to his Heavenly Father on February 19, 2021 after a short illness. Marvin was born October 5, 1961 to Marvin Noel and Patricia Gentry Spinks in Tallahassee, Florida. Marvin grew up in Ocala, Florida, and graduated from Vanguard High School in 1980. At the age of fourteen, Marvin began his shooting journey, under the tutelage and guidance of his father. He progressed quickly and was afforded the opportunity to train with the AMU at Ft. Benning, GA during much of his junior career. With this training, Marvin was able to win several State, Regional, National and International titles. In 1979 he won the first National Junior Olympic Championships and was named to Team USA. In 1980 Marvin won his first International Gold Medal, as a Junior, at the 1980 Benito Juarez Championships in Mexico City, Mexico. After receiving several shooting scholarship offers, including the military academies, Marvin chose to attend West Virginia University for their strong coaching staff and team. He was named double All-American while attending WVU. Two years later Marvin became a member of the Army Marksmanship Unit under the World-Class Athlete program. Upon retiring from international shooting, after an unfortunate shoulder injury, Marvin started Center Shot Shooting School, which served both recreational and competitive shooters, as well as corporate groups. Marvin was a certified instructor/coach by all US international and American discipline National Governing Bodies. In 2003, he was the youngest to graduate the NSCA Level III instructors’ course in the country. Marvin was a staff instructor at the 2004 and the 2005 Team USA Super Schools at NSCA Headquarters. He was named to the NRA/USAS National Coach Development Staff in 2006. Marvin consulted in Youth /Coach Development™ for several staterun programs including Arkansas, Arizona, Tennessee, Georgia, California, and with national organizations in youth and coach development. In 2007, Marvin attended the 11th ISSF Academy coaches’ course in Kuortane, Finland, held at the Kuortane Sports Institute. He was the first male in the United States to receive an Olympic Level Shotgun Coach Certification from the International Shooting Sport Federation. The ISSF is the governing body for all Olympic shooting sports. In 2011, Marvin partnered to establish the United States Clay Target Academy, an Olympic development program for Olympic shotgun sports. Marvin was a full time, professional shooting coach and instructor who dedicated his career to helping athletes and coaches reach their goals. In his lifetime, Marvin coached over 10,000 recreational and competitive shooting athletes and trained over 500 individuals in the NRA/USAS Level 1 Coach certification program. He coached individual athletes, teams, and coaches all over the country in American and Olympic shotgun disciplines and at Advanced Junior Shotgun Camps and National Junior Olympic Development Camps. Marvin was instrumental in helping athletes reach the podium in district, regional, state, national, and international championships as well as receive collegiate shooting scholarships and make the USA Shooting National Teams. Marvin is survived by his beloved wife, Bonnie, mother, Patricia G. Spinks, sister Cynthia Willman, daughters Courtney Spinks, Whitney Spinks and Mallery Freeman and two grandsons. He was predeceased by his father, Marvin Noel Spinks, and his dearly loved grandparents Marvin Henley and Nellie Johnson Spinks. Memorials can be directed to USA Shooting. Remembering Marvin: Over the course of Marvin’s battle with cancer, and his subsequent going home, so many reached out with words of encouragement, and shared memories of their time spent with Marvin - students, parents, coaches and friends in the shooting community, they spoke of how his charismatic personality, outlook on life, and style of coaching impacted their lives, both on and off the field. The same words kept being shared… extremely knowledgeable, visionary, highly technical and observant, dedicated, disciplined, charismatic, magnetic, hilarious, entertaining, engaging compassionate, excellence… “His enthusiasm and compassion for EVERY student to succeed and be the best was indescribable.” ~ Corey “Marvin had an incredible knack for figuring out what I was doing wrong then knowing how to communicate to me what I needed to do to correct the problem.” ~ Lindsay “Marvin was a great coach and friend.” ~ Rob “Marvin was a great man with a giving heart! I can personally say he touched me in a way that I truly believe made me a better man, father and coach. He was a man of integrity that treated everyone the same. He knew the game and how to get into the head of each athlete so they could shoot at their optimum ability.” ~ Dean “He was an amazing coach. This hit me hard.” ~ Taz “What an incredible man. He made quite possibly one of the biggest impacts on my life as a young kid. I will forever be thankful for the memories with y’all and everything you did for me and my family.” ~ Jeremy “The Lincoln County Trap Team thought a lot of him. I personally owe him everything there is to know about shooting trap.” ~ Mark As the team photographer, I traveled with the United States Clay Target Academy Team to various state and national championship events over a period of several years. In this capacity, I had many opportunities to study Marvin closely as I clicked away and documented his interactions with athletes and others in the shooting sports community. If you were to look through any of the massive photo albums, you would quickly observe that Marvin administered just the right dose of discipline, love, coaching and encouragement to foster confidence, excellence & love of the shooting sports in his young proteges. After missing a once- in-a lifetime opportunity to compete for the U.S. Olympic team himself, Marvin lived vicariously through those he mentored as he molded them from amateurs to elite athletes competing on the national stage, earning numerous medals and achieving positions on the podium. It is likely that we will not see another man with as much passion and gift for shooting sports again. Marvin’s great talent and gregarious nature will be sorely missed by all. ~ Amy

Marvin Charles Spinks, with his wife Bonnie by his side, passed peacefully home to his Heavenly Father on February 19, 2021 after a short illness. Marvin was born October 5, 1961 to Marvin Noel and Patricia Gentry Spinks in Tallahassee, Florida.... View Obituary & Service Information

The family of Marvin Charles Spinks created this Life Tributes page to make it easy to share your memories.

Marvin Charles Spinks, with his wife Bonnie by his side, passed...

Send flowers to the Spinks family.