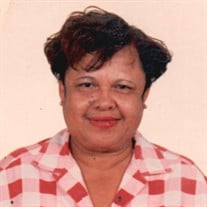 Marjorie Agatha Matthews, nee Allen was born in Green Island, Hanover, Jamaica on December 16th 1934. She was the first of seven (7) children born to Walter S. and Eva L. Allen. All of the other siblings were boys, of which three (3) are deceased. She attended the Primary School in the area until the age of ten (10) years old, when their Parents made the decision to relocate to Dias, Hanover in order to be in closer Proximity to other family members. She continued her early education at Riverside Elementary School, before attending Delrose High School in Kingston on a half scholarship. On graduating, she pursued a course in Secretarial duties at the Launceston Commercial College in Sav-la-mar, Westmoreland. She graduated with Certificates in Book-keeping, Shorthand and Typewriting, after which she joined a local Accounting Firm, Blythe and Company, as an indentured Clerk. In August 1957, she joined the Government Service as a Grade 2 Clerk in Lucea. It was an entry level job which allowed her to recognize the possibilities for advancement. Upon promotion, she was given the opportunity to transfer to another parish. Although not pleased to leave her 'Home Parish,' the will to expand her Horizons/Career overwhelmed her. In June 1970, she was transferred to the staff of the St. Ann Bay Parish Council as an Acting Senior Accountant. This was a Temporary Assignment. In February 1971, she was transferred to Morant Bay, where she took over the Accounting Responsibilities for the St. Thomas Parish Council. Her duties included supervision of an Office which dealt with Revenue Collection and Distribution, Budgeting, as well as all facets of Accounting and Book-Keeping etc. Although she enjoyed her tenure in St. Thomas, a promotion presented itself and she was once again transferred to Spanish Town, where she joined the St. Catherine Parish Council in June of 1979, as the Accountant and Financial Controller. Her sojourn with the Government concluded in December 1994, and after thirty-seven (37) years of service, she always expressed gratitude for the training and academics achieved from the University of the West Indies, via the government of Jamaica. Marjorie's hobbies were few and far between as she devoted most of her spare time to her family. Being the eldest and only female sibling, she had to share in the upbringing, and nurturing of her parents and six (6) brothers. However, she did enjoy reading, gardening, cooking, crocheting, and had a passion for traveling. It was on one of her trips to America, she met Lloyd Matthews, and after a whirlwind two (2) year courtship, married Lloyd in December 1995, and migrated to Tampa, Florida. Marjorie was a very loving, caring and compassionate person, and an ardent church-goer, who believed strongly in her religious faith. She leaves behind her husband Lloyd; her stepchildren Norman and Jacquelin; Brothers Kemel, Igol, Colville; Sisters in Law, Beverly and Naomi; and their many nephews, and nieces, cousins, and other extended family members, friends and associates, too numerous to mention. Aunt Sissy, as she was affectionately called, will be sadly missed by everyone who had the pleasure of meeting her. May she rest in Peace in the arms of the Lord. A visitation will be held at Boza & Roel Funeral Home on Wednesday, August 18th, from 5:00pm to 7:00pm A funeral service will be held at St. Clement's Episcopal Church on Thursday, August 19th, at 10:00am

Marjorie Agatha Matthews, nee Allen was born in Green Island, Hanover, Jamaica on December 16th 1934. She was the first of seven (7) children born to Walter S. and Eva L. Allen. All of the other siblings were boys, of which three (3) are deceased.... View Obituary & Service Information

The family of Marjorie Agatha Matthews created this Life Tributes page to make it easy to share your memories.

Send flowers to the Matthews family.