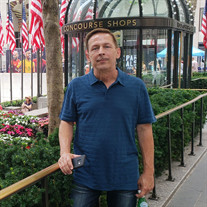 On Wednesday, November 25, 2020, Larry Mortellaro, loving husband, father and grandfather, passed away at the age of 61. Larry was born on September 29, 1959 in Tampa, FL to Salvatore “Sam” and Mary “Loraine” Mortellaro. He grew up in Tampa and attended Thomas Jefferson High School. On October 6, 1979, he married Sandy Leto. They raised two daughters, Amy and Stephanie. Larry worked in the Insurance Industry for over 30 years. He enjoyed family gatherings, and traveling, especially if there was music and dancing involved. He was known for his quick wit, his infectious laugh, and his kind compassionate spirit. Larry was preceded in death by his father, Sam. He is survived by his wife Sandy, his daughters, Amy (Brian) and Stephanie (Greg), his mother Loraine, his sister Darlene (Jim), his brother Jason (Jodie), his grandchildren Jocelyn, Madison, Emelee, Giovanni, Lorelai, and Jesse (on the way), his nieces Ashley, Nicole, Samantha and Stacy, his nephews Jason, Joseph, Paul, Jonathan and Adam, and great nieces and nephews. A funeral service will be held on Thursday, December 3, 2020 at Boza & Roel Funeral Home, 4730 N Armenia Ave, Tampa, Florida. Viewing starting at 5pm and service to follow at 6pm.

The family of Larry Charles Mortellaro created this Life Tributes page to make it easy to share your memories.

Send flowers to the Mortellaro family.