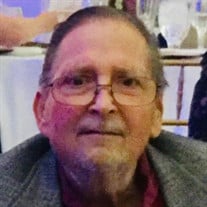 Joseph (Joe) Parrino peacefully passed away on Monday, February 15, 2021, surrounded by family after a brief illness that resulted from pre-existing health issues. He was preceded in death by his father, Joe T. Parrino, his beloved mother, Sue Zummo Parrino, his brother, Anthony Parrino, and brother in-law, Anthony “Bo” Vento. Joe was born on April 26, 1947 and attended Hillsborough High School (Class of 1965) where he excelled in school and played a leadership role in several clubs and activities. He graduated from the University of Miami with a B.S. in Science and went on to graduate from the University of Florida, School of Pharmacy with a B.S. in Pharmacy. Joe began his career as a pharmacist with Eckerd Pharmacy and later opened and managed his own store with Shoppers Drug Mart. He completed his pharmaceutical career at Merck-Medco. and retired in 2010, moving across the bay to St. Petersburg Beach to his condo at the Seamark, where he enjoyed many sunsets, fireworks, and cigars with his friends and family on the patio. His retirement ritual included a daily 7:30 a.m. breakfast at “his table” at Skidder's Restaurant, followed by a good book under “his umbrella” at “his table” in the corner of the deck. Joe was a wonderful friend and uncle to his nieces and nephews. Fond memories include Bucs games at the Big Sombrero, trips to several Super Bowls, Sunday dinners with Nana, fun at the beach, and holiday dinners. And, no family gathering was ever complete without an assortment of Uncle Joe’s decadent and delicious cheesecakes, made from scratch with pride and famous in their own right. He is survived by his loving sister, June Parrino Vento, his sister-in-law, Caroline Parrino, nieces and nephews; Anthony (Teresa) Parrino, Joseph (JoAnn) Parrino, Joanna (Vinny) Caranante, Susanne (Jon) Powers and Anthony (Erika) Vento, and his grand-nieces and nephews; Anthony George, Julia, Demmi, Katie, Caroline, Vincent, Trevor, Avery and Addison. A celebration of life will be held in the future when it is safe to gather.

Joseph (Joe) Parrino peacefully passed away on Monday, February 15, 2021, surrounded by family after a brief illness that resulted from pre-existing health issues. He was preceded in death by his father, Joe T. Parrino, his beloved mother, Sue... View Obituary & Service Information

The family of Joseph Parrino created this Life Tributes page to make it easy to share your memories.

Send flowers to the Parrino family.