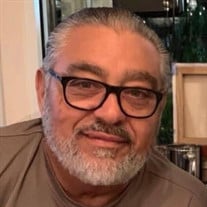 Joseph “JD” Guerra of West Tampa passed away on January 14, 2022. He was born on January 12, 1945, to Nicholas Guerra and Maria Ardizzone Guerra. He was the youngest of two children. He attended V.M. Ybor Elementary, West Tampa Jr. High, and Brewster Technical. He earned his Auto Mechanics degree. After graduation, JD began a career as an auto mechanic and later retired in 2011 as a Multi Trades Worker with the School District of Hillsborough County. He spent his early years in Ybor City before moving to West Tampa where he met the love of his life, Diane Pellegrino Guerra. They were married, November 21, 1965, at St. Joseph Catholic Church. JD was a member of St. Lawrence Catholic Church and a former member of the Tampa Knights Car Club. He served in the Army Reserves from 1964-1966. His most important accomplishments were his wedding, and the births of his children and grandchildren. He was a man of his word, loyal, dependable, funny, and talented in many ways. He enjoyed fishing, restoring antique cars, watching football, attending his granddaughter's soccer games, but above all spending time with his family and friends. JD loved 50’s music, his favorite song was “In the Still of the Night”. He is survived by his wife, Diane Pellegrino Guerra; daughter: Dana (Frank); son: Jason (Sheila); and granddaughter’s: Ciera (Chelsea), Miranda, Maresa (Noah), Bella, Ashley (Tim), Jordan (Bobby), Giavonna, and Gabriella. A Funeral Mass will be held on Tuesday, January 25, 2022, at 10:30am at St Lawrence Catholic Church, 5225 N. Himes Ave., Tampa. In lieu of flowers, monetary gifts will be accepted and distributed amongst JD’s favorite charities, St. Jude and the Kidney Foundation.

Joseph &#8220;JD&#8221; Guerra of West Tampa passed away on January 14, 2022. He was born on January 12, 1945, to Nicholas Guerra and Maria Ardizzone Guerra. He was the youngest of two children. He attended V.M. Ybor Elementary, West Tampa... View Obituary & Service Information

The family of Joseph D. Guerra created this Life Tributes page to make it easy to share your memories.

Send flowers to the Guerra family.