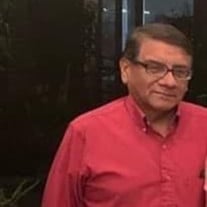 Jose Eulogio Huertas La Rosa, 71, of Tampa, Florida, passed away on April 29th, 2020. He was born to parents Eulogio and Feliciana Huertas, on September 12th, 1948, in Lima, Peru. Jose graduated from Externado Santo Toribio and earned a degree in Accounting from the University Federico Villareal. After working as an accountant for many years in Peru, he relocated with his family to Tampa, Florida (U.S.). Here, he found his calling in Christianity and decided to pursue a degree in Theology at Concordia Seminary. He would later become Pastor of the Christian Church Jesus Amigo Fiel, where he would serve the Hispanic Community through extensive charitable work until his last days. He married Maria Cristina, the love of his life, in 1987, who survives him. Jose is also survived by his daughters Carolina Huertas and Audry Calle, their husbands Apolo and Alexander, respectively, by his sons Jose Antonio Huertas and Josue Huertas, and by his sisters Delia Huertas and Amparo Hidalgo. Jose was predeceased by parents Eulogio and Feliciana Huertas. Jose became very close to the ways of God through Christianity. He was passionate about the work his church did in the community and the impact it had in the lives of everyone he reached. Jose was also passionate about soccer, closely following the Peruvian National Soccer Team and his childhood soccer club, Alianza Lima. Luckily, he was able to see Peru play in a World Cup in 2018, after a 35-year drought. Jose was a devoted father and husband, loved and respected by many friends, acquaintances, and brothers and sisters in Christ. A funeral service will be held on Wednesday, May 13, 2020, at Boza & Roel Funeral Home from 3:00 pm to 5:00 pm.

The family of Jose Huertas La Rosa created this Life Tributes page to make it easy to share your memories.