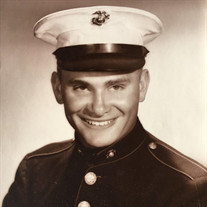 Dr. John Cosgrove Follman, 93, a retired professor at the University of South Florida, died on August 15, 2021, due to complications from cancer. Born in Omaha, Nebraska on December 15, 1927, to Dr. John Christopher Follman and Anne Cosgrove Follman. John attended Creighton Preparatory School, a Jesuit high school, in Omaha. After high school, he worked as a brakeman for the Union Pacific Railroad, traveling all over the Western United States. He joined the Marine Corps Reserve in 1950. After the start of the Korean War, John was called to service and shipped to Korea for a 13-month tour of duty. Initially assigned to an intelligence unit, he transferred to an Intelligence and Reconnaissance platoon in the field and was involved in multiple combat actions in 1951 and 1952. After being honorably discharged, he attended Creighton University and the University of Nebraska at Lincoln for his B.A. In 1956, John married Noreen Madden, and they subsequently had five children: John (deceased), Michelle (deceased), Joe, Julie, and Daniel. After completing his Ph.D. in Educational Psychology, John taught for two years at the University of Wisconsin at Oshkosh. In 1966, he accepted a faculty position at the University of South Florida main campus in Tampa. Over the next 37 years, he taught thousands of aspiring and higher degree-seeking teachers. He twice chaired the department, chaired doctoral committees for scores of Ph.D. candidates, and published over 300 articles in scholarly journals. He also taught classes for USF students in Ft. Myers, Bradenton, Punta Gorda, St. Petersburg, and Ocala. After retiring in 2003, he devoted his energies to following the stock market and rooting for his beloved Nebraska Cornhuskers. He enjoyed bird watching, telling dad jokes, and driving at a magisterial pace on country roads. Survivors include his spouse, Noreen; children Joe, Julie, and Daniel; daughters-in-law Elizabeth, Rebecca, and Rosalinda; son-in-law Rick Deal; grandchildren: Jessica Eleff, Jeffrey Follman, Leslie Landers, Emily Varley, Gabrielle Deal, Sofia Follman, and Lucia Follman; and three great grandchildren. A celebration of life will be held on August 17 at 6:30 p.m., at Boza & Roel Funeral Home, 4730 North Armenia Avenue, Tampa. In lieu of flowers, please send a donation to the Semper Fi Foundation for wounded Marines or the St. Jude Children’s Research Hospital.

Dr. John Cosgrove Follman, 93, a retired professor at the University of South Florida, died on August 15, 2021, due to complications from cancer. Born in Omaha, Nebraska on December 15, 1927, to Dr. John Christopher Follman and Anne Cosgrove... View Obituary & Service Information

The family of John Cosgrove Follman created this Life Tributes page to make it easy to share your memories.

Dr. John Cosgrove Follman, 93, a retired professor at the University...

Send flowers to the Follman family.