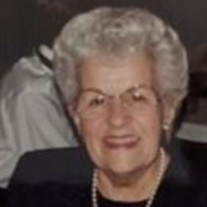 Grace passed peacefully into the arms of her savior on 1/22/2021 Born 12/23/23, the last of 10 children born to Cuban immigrants Jose Fornell Martinez & Flora Acevedo de Martinez. Grace was born in Key West Florida, something of which she was fiercely proud of. She would grow up in West Tampa. Her father, a cigar maker, died when she was 6, leaving a young widow & 7 children. Her older siblings become like aunts and uncles and they spoiled her terribly. She entered 1st grade unable to speak English. Grace would become the first in her family to graduate high school and as an honor student. She learned Italian through playmates as West Tampa was then an enclave of mostly Spanish, Cuban & Sicilian cigar workers. This would help later as she would marry Gene Bartolotti, son of Sicilian Immigrants. When she met his family, she told his grandmother, “Watch what you say about me because I speak your language” and they bonded instantly. They married in June 1943 and they started their family of 4 children, 2 boys & 2 girls. In June 1955, Papa moved the family out to his father’s dairy farm, near Seffner. He would eventually take over the business until 1987 when I-75 divided the property & decided to retire. Mom eventually adapted to farm life. She got used to the many animals, wild & domestic that we would bring home. 2 of her kids loved horses and would ride in local horse shows. One was a bit of a daredevil. Mom protested but lost as Papa was all in. So frayed nerves and nail biting, she was at every event cheering them on. Grace and Gene had a strong but stormy life together. A Cuban and a Sicilian, what would you expect. Our house was nothing fancy but warm and welcoming. Between the storms, there were many celebrations with family and friends. Everyone loved coming out to the farm. Her beloved godson “Mayito” Mario Herce, only wanted milk from the brown cows because he favored chocolate milk. During the Vietnam war, she loaned her 2 sons to Uncle Sam, as well as nephews and sons of friends and neighbors. It is in part due to her prayers and faith promises, that we are here today. Though she could go from Mother Teresa to Mommy dearest in a heartbeat, Grace did love kids. She had many God children and unofficially adopted or “surrogate” kids, nieces, and nephews. Weekends and summers, our house was filled with kids from as far as Key West and Northern Spain. Christmas was a big deal at our house with extended family and friends. In their golden years, Grace and Gene were able to travel quite a bit. When Papa sold the business, he bought a travel trailer and they set off on a cross country trek making many friends along the way. They visited France, Spain and Italy. When they could no longer maintain their house alone, they moved in with their youngest daughter Katie who would become Mom’s devoted primary caregiver until the end. Grace was diminutive, 5’ tall 100 lbs. but a force of nature. You could always hear her before you saw her. She had a booming voice from such a small body and a shrill whistle that would bring us running from the back 40 about a mile from the house. Once my friend Don High was in a doctor’s waiting room, Grace and Gene were in the inner office talking to the doc. Don who has hearing aids, told his wife, Grace Bartolotti is in here (true story). A few years ago, Lennie had a little heart trouble. She said, that’s from your Father’s side of the family because the only health issue you could inherit from my side, is insanity. There is this thing that we cousins can only understand, it’s called the Martinez factor, but that’s another story. Mom was passionate, fiercely loyal, and opinionated. She could argue with a fence post, and win. If she was your friend, she’d go to the wall for you. If she was your foe, she would push you to the wall. Mom was raised Christian in the Catholic church by the Salesians, her unwavering faith in Jesus, sustained her until the end. She delighted in the weekly visits from Father Steve Dumais and while in hospice, visits from Father Tom. Grace was lots of things to lots of people, but most of all she was Mom. In closing, all I can say is “Sleep with the Angels Grapie”. Ya no tienes que estar cansada. You’ve earned your rest. Hugs to Papa from all of us. A special thanks to the wonderful caretakers who truly became part of our extended family during the months of the Covid pandemic, Visiting Angels, Ariannys, Josefina, Yadiris and Narcisca… who cared for Mom as if she were their very own. And to the all the Indigo Team at Lifepath Hospice, nurses, Bill, Rita and Carol. Also a very special thanks to Father Steve Dumais, Mary Help of Christians and to Father Tom, Sun City Hospice for their caring, support and spiritual guidance. We are most grateful for all the prayers and condolences to the family via telephone, texts, email and social media. In lieu of flowers, remembrances may be sent to Mary Help of Christians Parish, 6400 East Chelsea Street, Tampa, Florida 33610 813 626-6191 or Lifepath Hospice, 3725 Upper Creek Dr., Ruskin, Florida 33573

Grace passed peacefully into the arms of her savior on 1/22/2021 Born 12/23/23, the last of 10 children born to Cuban immigrants Jose Fornell Martinez & Flora Acevedo de Martinez. Grace was born in Key West Florida, something of which she was... View Obituary & Service Information

The family of Grace Martinez Bartolotti created this Life Tributes page to make it easy to share your memories.

Send flowers to the Bartolotti family.