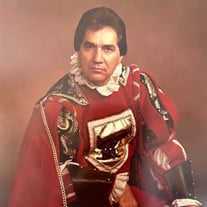 George Glen Diaz was born on June 6, 1929 in Tampa, Florida. George lived and experienced a very passionate and fulfilling life. He was the life of the party, a great friend to all, taking many nephews under his wing, a wonderful husband, and an amazing father. George was aptly described by his fellow Krewe members in their newsletter saying, "He grew up with a definite flair for excellence, high fashion and style, and man, could he dance!” The passions of his life were his beloved family, European travel, and the Krewe of Sant’ Yago. He cherished his wife, children, grandchildren, nieces and nephews and built his life around creating an atmosphere of love and family bonds. He would toast to “La Familia" and expressed to us to always care for each other. He stressed to always remember where you came from and always keep the traditions that keep the family ties strong. His love for travel began during military duty in Europe, where he was stationed in Germany, as a medic. While in the Army, George choreographed performances for the troops and even participated in a show with the famous entertainer, Vic Damone. After the war, his travels included various escapades to France, Spain, Austria and Italy. For a year, he lived in Rue Cler, Paris, France and worked for the American Newspaper - Stars and Stripes. His experiences were colorful and varied; there, he developed a love of European culture, architecture and history. When George returned home, he began to court the girl next door, Aida Coton. She said he would come to her family grocery store and try to finagle free cigarettes and snacks. He often succeeded! George proposed marriage to Aida by mail and wanted her to move to Chicago, where he was attending Northwestern University earning a lab and x-ray technician license. Aida was reluctant and did not want to move to Chicago, declining his marriage proposal. He returned home and decided to stay in his hometown and marry his sweetheart Aida on March 17, 1957. After working at Tampa General, he was disillusioned with his chosen profession and decided to make a change. After seeing an ad for a sales manager, George applied and was hired for the downtown Tampa clothing stores Clarks, Deans and Kings Credit Clothiers. He was very successful and worked for about 15 years making sure that all clients ,especially the University of Tampa football players, left in style. At age 40, he decided to venture on his own and began to sell real estate. George was very successful for many years selling homes until his passing. We constantly heard from his clients that he would go back long after the sale and visit with them, sharing some small talk -usually over coffee. If his clients needed assistance to translate, he was there. He made the American dream become a reality to many Cuban and Hispanic families that migrated to the Tampa Bay Area. He fought to get credit that was difficult to come by and did his best to help them in any way possible with whatever was needed. George was an active member of the Krewe of Sant’ Yago for 43 years. His years in the Krewe of Sant’ Yago provided him with many loyal friendships. He spent many days and nights producing, designing costumes, and creating royal sets for the Krewe functions. He cherished his friendships and camaraderie during his entire lifetime and remained a member until his passing. His Knights title and costume was ever so special to him. He coordinated and planned a European Vacation taking his entire family touring through France, Spain and Italy. This was the dream of his lifetime. The memories made will forever be held close to his family’s hearts. George is survived by his wife of 65 years Aida; his loving children Denise Costantino (Joe), Nadine Diaz (Shane Wakefield) and Sharon Diaz (Sissy); adoring grandchildren Dr. Courtney Costantino, Stephanie Prado (JC), Stefan Jorge Wakefield and Araceli Wakefield; Sean, Josh, and Stephanie Menendez; and many loving nieces, nephews, and the treasured friends who became family. Also a special thanks to Elizabeth (Beverly) Roque Reyes, who kindly cared for George in his last days. Visitation will be held on Saturday, March 19, 2022 from 10:00-12:00 PM at the Boza & Roel Funeral Home, 4730 North Armenia Ave., Tampa followed by services at 12:00 PM. Interment will follow at Woodlawn Pyramid Crypts. Please see attached article from KSY honoring George Diaz https://krewesantyago.org/a-tribute-to-one-of-our-own-sharing-the-stories-of-krewe-members-who-paved-the-way/

George Glen Diaz was born on June 6, 1929 in Tampa, Florida. George lived and experienced a very passionate and fulfilling life. He was the life of the party, a great friend to all, taking many nephews under his wing, a wonderful husband, and... View Obituary & Service Information

The family of George G. Diaz created this Life Tributes page to make it easy to share your memories.

Send flowers to the Diaz family.