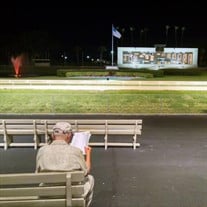 This is the story of Fiol Cruz, born October 30, 1930, in the southern coast of Cuba right outside the city of Cienfuegos. The son of a loving and hard-working mother, Maria Espinoza, and a strict disciplinarian father Santiago Cruz, Fiol passed peacefully on November 17, 2021, at the age of 91 to be reunited with his beloved wife of 66 years Edelmira Cruz Ordovaz died in 2018. He is survived by two children, Armando Luis Cruz (his spouse Michelle Cruz) and Mayda Guadalupe Cruz Miranda (her spouse Larry Miranda). He was a beloved Grandfather to 5 grandchildren Jaime, William, Audrey, Ana Lisa, Trey, and a great-grandfather to Luke and Sophia. Although not famous, Fiol, “The Photographer” was known world-wide. Not by his name, but, through his profession and association to the Columbia Restaurant in Ybor City, Tampa. He was the House Photographer there for nearly 50-years. As I traveled the world for business, whether Moscow, Beijing, London, Rome, or Madrid, and the casual conversation turned to “what is your hometown?” and I replied “Tampa, Florida”, the fame of the Columbia Restaurant was the iconic landmark they mostly related to. Consequently, I would ask them if by chance, a Photographer with a Ricky Ricardo type Cuban accent approached them with the all too familiar question … “Is you want to take a picture?” To my amazement – the response was a universal “YES”. He always loved to hear those stories, and from time to time would canvass his inventory of photographs trying to decipher the tourist I described. His passion for photography rose not from an affinity to the art, but from the difficult circumstances of life in Cuba during WWII. At the tender age of 12, Fiol with his family no longer affording to feed him embarked on the 156-mile journey from Cienfuegos to Havana. Alone, no money, little clothing, and with only a 3rd grade education, his only solace was his determination. On that first night, in the capital city of La Habana, during a not too uncommon thunderstorm, he sought refuge from the rain in the porch of a Photography Studio. That night, while he slept in the bare porch of that doorstep, providence would shine upon him and change the course of his life! And, as fate would have it, the lives of many others, like ours. For you see, the proprietor of that studio, whose name is now lost to history, not only allowed the young Fiol to remain in the Studio, but, taught him the skills of the art and ignited what became his passion for perfection in photography. As a Photographer, he prospered and even became one of several photographers and journalists to work in the Cuban Government Office of Public Information. However, with a young family to feed and the seeds of discord resulting from the Cuban revolution, day-to-day life for the average citizen, particularly one working in government services, was very difficult. So, once again he made a bold move. On June 6, 1958, he uprooted his young family! Again, with no money, little education, but this time with a dream. A better life in America!! Life in the US was not always easy for him; the language barrier, his lack of higher education, and always working multiple jobs during the day to make a better life for us. We were never in need of food, clothing, or an appreciation for all things made in America. I still remember our first car, a used, green 1953 Pontiac Chieftain. He loved that car! Every Sunday, Mayda and I would have to endure a trip from our home near the current Raymond James Football stadium to the Clearwater Pier and back. No frills, no luxuries, just the “thrill” of him driving that car all the way to Clearwater and back! His hobbies were few, in fact, only 1 we can recall. His passion for Greyhound Racing!! Although, as mentioned, he had little education he did have a very analytical mind. He could calculate odds, project statistical results, and enjoyed sharing his knowledge of everything Greyhound Racing to whomever would listen. He had a wry sense of humor and while his jokes weren’t always that funny – but his telling of the joke made them funny. He loved his family! Always protective! Headstrong! But, in reality a very sensitive man. In his passing, many have come forward to offer their condolences and share many little stories of their interactions with him. Mayda and I both thank you! For many years he was the Little League Photographer at West Tampa Little League near MacFarland Park. Many little league ball players still remember him. Some, now past major leaguer players, other’s lawyers, plumbers, electricians, etc. The common bond they share, besides those little league years, are that Fiol was their wedding photographer. Their children’s baptismal photographer, and yes, the Columbia Restaurant photographer taking their picture during the Flamenco Show intermission. He enjoyed a long run, a life full of ups and downs, but a life always full of dreams. He never stopped dreaming. He never lost optimism. What he personally never accomplished he rejoiced in us and others doing so. He often bragged about our achievements, never missing the opportunity to brag about us. In closing the chapter of his life, it is evident, that “we” became the realization of the dream of a 12-year-old runaway, on a rainy night, in a faraway big city, on the footsteps of a Photography Studio porch, in 1942. Residing with Mayda and Larry in the same household he was so proud to have purchased in March of 1963 rounded out his life, made him complete. Mayda and Larry catered to all his whims (demands is a better word), and he loved them dearly for it!! Rest in Peace Dad!!!

This is the story of Fiol Cruz, born October 30, 1930, in the southern coast of Cuba right outside the city of Cienfuegos. The son of a loving and hard-working mother, Maria Espinoza, and a strict disciplinarian father Santiago Cruz, Fiol passed... View Obituary & Service Information

The family of Fiol Cruz created this Life Tributes page to make it easy to share your memories.

Send flowers to the Cruz family.