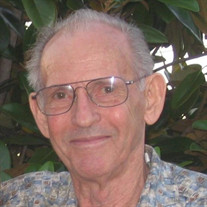 Moore, Elton Hollowell, 87, of Tampa, FL passed away December 3, 2021 from Alzheimer's disease. He was born February 11, 1934 and raised in Hobbsville, NC. Elton joined the Air Force in 1955 and after being discharged began working as a civilian at MacDill Air Force Base golf course. In his 30+ years there he worked his way up to superintendent, a position he held until retiring in 1991. After retiring, he operated a woodworking business on West Azeele Street in Tampa. Later, his son, David joined him in the business. Elton worked many side jobs and had many accomplishments, too numerous to mention. He was preceded in death by his parents, Jennie Pearl and Herman Moore, his brother Melvin Moore and his daughter, Kristina Marie Houston. He is survived by his wife of 64 years, Mary Lou, daughters Roseanne (Robert) Wilbur, Theresa Moore, Susanne Rager, his son, David, brothers Oley and Larry (Ann) Moore and brother-in-law James Hass and family, 7 grandchildren and 9 great-grandchildren. Elton will be in our hearts and prayers forever. A memorial service and celebration of life will be held at Boza and Roel Funeral Home, 4730 N. Armenia Avenue, Tampa on Wednesday, December 15, 2021, from 6:00 - 9:00pm. In lieu of flowers donations may be made in his memory to the Alzheimer's Association, https://www.alz.org/ or another charity of your choice. Elton “He never said, “I love you,” in words I can recall. He felt it not the manly thing to do. Yet, deep within my heart I know that love was really there. His eyes, his touch, the things he did all told me that it’s true. And now it’s time to say, ‘Goodbye,’ to Father and to friend. Sweet memories remain of him, ones that will not end.”

Moore, Elton Hollowell, 87, of Tampa, FL passed away December 3, 2021 from Alzheimer's disease. He was born February 11, 1934 and raised in Hobbsville, NC. Elton joined the Air Force in 1955 and after being discharged began working as a civilian... View Obituary & Service Information

The family of Elton H. Moore created this Life Tributes page to make it easy to share your memories.

Send flowers to the Moore family.