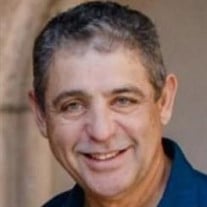 Elias D Figueroa passed away on Sunday, October 11th, 2020 at the age of 63 in Mease Dunedin Hospital. Elias was born in Santurce, Puerto Rico on January 20, 1957. He was the youngest of four to parents Elias and Elba Figueroa along with his brothers, Eluid, Eliezer, and Edwin Figueroa. Elias also had three additional siblings from Elba's second marriage, Carmen, Cathy, and Ralph Gargiulo. In 1978, Elias joined the military and was a proud soldier of the Army. He wore his military uniform with pride and received many awards throughout his years serving. He was married to Ross Hubbard on December 23rd, 1983 where he was stationed in Panama, calling Ross his souvenir. After his service with the military in 1984, he started a new career as an air conditioning technician/ engineer and became one of the best in his field. He was very knowledgeable in his profession and was a true hard worker. He was always willing to give out a helping hand and was a strong believer in "paying it forward". Elias was a great husband, father, friend, neighbor, and co-worker. Anyone who met Elias, loved him and he was a caring person with a heart of gold. He was known for his contagious laugh and his gentle demeanor. He was the comedian of the family who always wanted to make people laugh and have a good time. In summer of 2020, Elias tested positive for COVID-19 and fought for his life for three months. During this time, the virus caused severe damage to his lungs until his body could no longer endure it. Elias was a fierce fighter until the very end and his family is very proud of him. He will truly be missed and forever in our hearts. Elias Figueroa is survived by his wife, Ross Figueroa and their two children, Gina Figueroa Tal and Daniel Figueroa; his granddaughter, Gabriella Figueroa; his son-in law, Ilias Tal; his first two children, Yaritza Figueroa and Elias Figueroa JR, and their children; his brothers, Eluid Figueroa and wife, Dolores Figueroa, Eliezer Figueroa and wife, Maria Figueroa, Edwin Figueroa and wife, Acela Somma-Figueroa, and Ralph Gargiulo; his sisters, Carmen Diaz and Cathy Cortez; and his nieces and nephews. A celebration of life will be held at Boza & Roel funeral home on Saturday, October 17th, 2020 at 3pm, followed by a memorial service promptly at 4pm. He will be cremated and will have a military funeral service at Bay Pines National Cemetery in St. Petersburg, FL where he will be honored and his ashes will be placed to rest (TBD).

Elias D Figueroa passed away on Sunday, October 11th, 2020 at the age of 63 in Mease Dunedin Hospital. Elias was born in Santurce, Puerto Rico on January 20, 1957. He was the youngest of four to parents Elias and Elba Figueroa along with his... View Obituary & Service Information

The family of Elias D Figueroa created this Life Tributes page to make it easy to share your memories.

Send flowers to the Figueroa family.