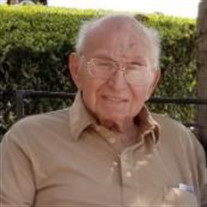 Dominic Ficarrotta, 92, of Carrollwood (Tampa) Florida , passed quietly in sleep December 21, 2021 at the VA Hospital (Hospice Unit). Born in YBOR City Tampa to parents Phillip Ficarrotta and Maria (Caporice) He is a Widower to first Wife Jessie F. (Weaver) and second wife Peggy Joan (Whitlock). Dominic was a graduate of Jefferson High School, he also attended University of Tampa. He started with his Ornamental Iron Business, making hand rails and columns for Ybor City residence. Owner Operator Industrial Machine Works, served in the Navy as Aircraft Mechanic on the USS Midway also Served in the Army as Heavy Artillery Repair in Korea and in the Army Reserve unit here in Tampa. Dominic loved his family and friends, Joe Castellano, Frank Vacanti, Nancy Vega and many more. He Loved to Dance, Draw, listen to Old Italian Music, and talk about the history of Ybor City. He is survived by Sister Carolina (Ficarrotta) Fox, Son Phillip, Daughter Mary Bradbury and 8 Grand Children DJ, Christopher, Judy, Johnny, Janet, Jeanie, Jody, and Frances, Cousins Carrie Ficarrotta and John Caporice and many more. He was preceded in death by His Brother Peter, Wife Jessie, wife Joan, sons James (Jimmy), and Dominic II. I would like to extend a special thanks to the Veterans Administration and Life Path Hospice for the quality care and assistance given to my dad during his time of need. I cannot leave out Dr. Carrico and her staff from the VA for their expert care and genuine concern for my dad. Thank You All!

The family of Dominic Ficarrotta created this Life Tributes page to make it easy to share your memories.

Send flowers to the Ficarrotta family.