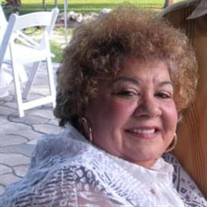 Perez, Celeste A. “Chela” went to be with her Lord on Friday, June 18, 2021. Chela was born in Cuba. At 20 years old Chela and her 23 year old sister, Hilda , decided to live with family in Tampa and pursue a better opportunity as well as a better place to raise a family. Chela was married for 19 years and maintained the household for her husband and two sons, Frank III, and Anthony S. After her divorce, Chela became a cosmetologist where she built a strong and loyal clientele base. Chela was always ready to dance or throw a party. She had the personality like no other and made lifelong friends anywhere she went. Chela is survived by her sons, Frank III and Anthony S. (Debra), grandsons, Daniel and David, sister Hilda, nieces and nephews in Tampa; Cindy Suarez, John Gonzalez, and Debbie Toloday, and so many more in Miami that it is just too long to list. There will be a funeral mass held for her on Thursday, June 24, at St. Jerome Catholic Church, the little chapel, at 3pm. And we will also be having a Celebration of Life Party for her at 6pm, June 26, at her favorite oyster bar, Ricks on the River.

The family of Celeste A. Perez created this Life Tributes page to make it easy to share your memories.

Perez, Celeste A. “Chela” went to be with her Lord on Friday,...

Send flowers to the Perez family.