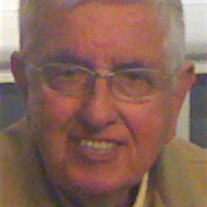 Dr. Anthony Cuva (84) passed away Tuesday, July 13, 2021 with his children by his side. Anthony was born on December 2, 1936, in Passaic, N.J. He was the oldest of their 5 children. He graduated from Passaic High School in 1954, Fordham University in 1958, and from Loyola School of Medicine in 1962. He married his wife, Barbara Pyne, days after he graduated from medical school and they were happily married for nearly 49 years. Dr. Cuva was a United States Army Veteran and served as a Captain and Doctor giving physicals to young servicemen heading off to the Vietnam War. As a teen, Anthony's claim-to-fame was that he pitched a no-hitter in baseball, but he studied and worked most of his youth to educate himself, which remained his life's passion. Anthony was an encyclopedia of knowledge from medicine and mathematics to philosophy and theology. He was an extraordinary listener, an understanding counselor, and a good friend. Anthony was wise, patient, and possessed great fortitude. He inspired and mentored many with his gifts along his journey. He offered his every thought, word, and deed to God and served Him to the best of his ability. He was a physician for 50 years. As a parishioner of Sts. Peter and Paul the Apostles Catholic Church, Anthony was a Knight of Columbus and an RCIA Teacher. He was a Cursillista of The Cursillo Movement and also volunteered his professional services to Solve Maternity House. When not working, he cherished spending time with his wife, Barbara, and their children, traveling, teaching them how to sail, acting as a scout master, and challenging them to a chess or a scrabble match. Anthony was the patriarch in a home where God came first, all were welcome, happy memories were created, and many laughs have been shared. Anthony was predeceased by his father, Paul, his mother, Marion, his Uncle Tony, his brother Joe (Roz), his wife, Barbara, and her parents John and Evelyn Pyne. He is survived by his children, Joseph, Tony (Laurie), Philip (Lisa), and Alice. He is also survived by his sister's Dona (Mike) and Fran (Mike), his brother, Paul (Carol), his eight grandchildren Sam, Zoe, Abby, Veronica, Zach, Maxine, Lainie and Kellen, his brothers-in-law, Jack (Paula) and Jeff (Candie) Pyne, and many treasured cousins, nieces, and nephews. On behalf of Dr. Cuva, Our Family would like to thank each and every individual who provided outstanding care for our father. On behalf of Anthony Cuva, in lieu of flowers please send any donations to Solve Maternity Homes. A funeral mass will be held on August 4, 2021, at 12p.m. at St. Joseph Catholic Church, 3100 26th St W, Bradenton, FL 34205

Dr. Anthony Cuva (84) passed away Tuesday, July 13, 2021 with his children by his side. Anthony was born on December 2, 1936, in Passaic, N.J. He was the oldest of their 5 children. He graduated from Passaic High School in 1954, Fordham University... View Obituary & Service Information

The family of Anthony Cuva created this Life Tributes page to make it easy to share your memories.

Send flowers to the Cuva family.