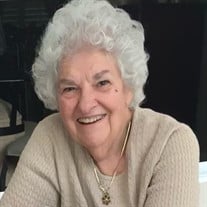 On Monday, April 5, 2021, Ana Maqueira, loving wife and mother of two, passed away at the age of 78. Ana was born on April 16, 1942 in Pinar del Río, Cuba, to David and Maria Perez. On August 25, 1961 she married Alfredo Maqueira, with whom she moved to the US in 1971 and raised two sons, Alfredo and Aristides. Upon moving to the US she learned English, studied to receive her G.E.D in 1980, and worked as a medical records clerk at UCH Hospital, where she was beloved by all of the physicians and peers she worked alongside, and gained many lifelong friends. She retired from this role with high honors and praise after 25 years of service. She was a devoted and skillful gardener, who excitedly tended to her bounty of plants and flowers; a faithful Macy’s coupon cutter; and a sports fan. She enjoyed watching her son’s little league baseball games, her grandson’s tennis matches, parking cars on Sundays for Buccaneers games, and was an avid Tampa Bay Rays fan (especially Evan Longoria). Above all else, Ana was a natural born caretaker. Whether it was devoting herself and opening her home to a wide chosen family, pouring her heart into elaborate and delicious meals, raising her sons to be kind and thoughtful, or taking care of her loved ones in need, Ana showed her boundless love for those around her through acts of service, and was always there to offer a cafecito. In all facets of her life, she was the first to start cooking and the last to serve herself a plate. When asked about her husband, Alfredo, she would tell you she knew he was the one from the age of six. They were married in 1961, enjoyed 60 happy years together, and she never doubted this childhood crush. Ana is survived by her loving husband Alfredo, her two sons, Alfredo (wife Nancy) and Aristides (wife Denise), her grandchildren Shayla and Alex, and the many others she welcomed to eat at her table. Her smile, her wit, her kind and giving heart, as well as her Ropa Vieja, will not be forgotten.

The family of Ana Maqueira created this Life Tributes page to make it easy to share your memories.

Send flowers to the Maqueira family.