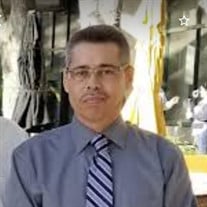 Ortiz, Alexis, "Tito", age 56, formerly of Tampa passed away on Thursday, December 17,2020. Tito was born in Isabella, Puerto Rico to Hermino and Maria Ortiz. He attended Plainfield High School (Plainfield, NJ) and became an ASE certified auto body mechanic. Tito married Tina (Booth) Ortiz in 1985 and together they had 3 beautiful children whom he adored and loved, Diane, Alex, and Christina Ortiz. Tito and Tina went their separate ways in the early 2000's and that's when Tito started a new chapter of his life in Tampa, Fl. He has been with his companion Jacqueline Agosto who stayed by his side and her two sons, whom he treated as his own, Aaron and Andrew Rodriguez. Tito is survived by his father; Hermino Ortiz, his estranged wife ;Tina Ortiz, his Children; Diane Ortiz, Alex Ortiz and Christina Ortiz, his brother; Hermino Ortiz Jr, His sisters ; Elsa "Lucy" Morales (Luis Morales), Lydia Veras (Manuel Veras), Ada Flores (Raul Flores), Milta Williams, Ruthy Perez (Adolfo Perez), his nine grandchildren, his companion; Jacqueline Agosto and her sons ; Aaron Rodriguez and Andrew Rodriguez along with hosts of nieces, nephews, aunts, and uncles. Tito was predeceased by his mother ; Maria Ortiz and his brother; Antonio Ortiz. Tito was a great father, THE BEST mechanic, and great partner. He was a good man loved by all who knew him. Tito was a hardworking man who provided for his family and irreplaceable. Everyone looked up to him and trusted him with his car knowledge. Tito could fix, paint and diagnosis a car without any hesitation. Not only was he good with cars but his was great with his hands. He could build and fix anything. We all know he loved cars, but he also loved the beach, wood carving, landscaping, and his dogs. We are all saddened by his early departure and he will be missed by all who knew him. He fought a good fight with his health issues but now he is at eternal peace with is beloved mother and brother.

The family of Alexis Eliseo Ortiz-Nieves created this Life Tributes page to make it easy to share your memories.

Send flowers to the Ortiz-Nieves family.